As I write, HIV experts are meeting at the The International HIV Treatment as Prevention Conference in Vancouver, Canada. Treatment as prevention has become the new and exciting avenue that advocacy, behavior change, and clinical HIV practitioners have embraced in recent years to combat transmission.  But what does the general public know about treatment as prevention? As a lead in to an in depth article on the cost effectiveness of HIV treatment as prevention, written by Adina Goldberger for the forthcoming edition of the Northwestern Public Health Review, I would like to provide here some history and background on the topic.

HIV treatment as prevention was first pioneered by Dr. Julio Montaner and his team in 2006 at the British Columbia Centre for Excellence in HIV/AIDS.  The idea is that if HIV positive individuals are placed on Highly Active Antiretroviral Therapy (HAART) early enough, it will decrease the amount of the HIV virus in their system (their viral load) to undetectable levels. This not only turns HIV into a manageable chronic condition, but it also highly decreases the chance that an HIV positive person would transmit the virus to a sexual partner. Thus, if transmission is decreased than eventually HIV will no longer spread at the incredibly fast rate it once had.

Dr. Montaner and team published a major paper in the Lancet [1] calling for the expansion of access to HAART based on a mathematical model which predicted dramatic declines in HIV prevalence if HAART access were made universal. Over the next few years, Dr. Montaner and his team continued to mount and present evidence for the importance of the model, gaining the attention of UNAIDS and other major health organizations. Picking up on the momentum, in 2009 the World Health Organization published its own model, based on Montaner’s, that calculated that HIV transmission could be virtually eliminated by 2020 in countries with high levels of HIV prevalence. The only catch is that everyone in the community must be tested for HIV infection once a year and then those who tested positive must be provided antiretroviral therapy [2]. 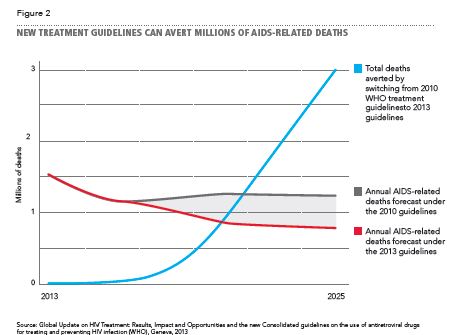 In 2008, the Swiss National AIDS Commission issued what is now referred to as the “Swiss Statement.” The statement asserted that “an HIV-infected person on antiretroviral therapy with completely suppressed viraemia (“effective ART”) is not sexually infectious, i.e. cannot transmit HIV through sexual contact”. The statement was originally intended as an authoritative guide for Swiss doctors, in response to numerous prosecutions and convictions of many HIV positive people who had exposed their partners to HIV. The statement was to provide a legal connection for the medical evidence that doctors were to provide in such cases. Thus the Swiss Statement codified that fact that if an HIV positive person had a undetectable viral load, than it would be impossible for them to transmit the virus and could not be convicted of exposing their partner [3].

The momentum continued in 2010, when China became the first country to embrace the model, implementing a country-wide treatment as prevention strategy. The in 2011, the New England Journal of Medicine published the results of a major study [4] conducted by the US National Institutes of Health. The study, conducted in 13 countries, reporting a 96% reduction in the transmission of HIV in those receiving immediate treatment versus those receiving delayed treatment. The study was stopped four years early because it was deemed unethical to deny treatment any longer for the group that was delayed treatment. Since then UNAIDS has signed on to support treatment as prevention, launching the Treatment 2015 framework, which calls for intensified action and innovation to expedite treatment scale-up [5].

Treatment 2015 has set the goal for its members of reaching 15 million people by 2015. The framework has set up three pillars; demand, invest, and deliver. It lays out a plan for national preparedness to “rapidly bring HIV treatment to scale and strategically focusing resources on key settings and populations with high HIV prevalence and unmet need for HIV treatment” [6]. Included in this plan the near universal move to prevent Mother to Child HIV Transmission using what is known as Option B+, a policy which gives HIV-positive pregnant women immediate and lifelong access to antiretroviral therapy, regardless of their CD4 count.

The field of HIV treatment as prevention is still evolving rapidly, but all signs point to a potential game changer in the progression of HIV transmission worldwide. With no vaccine in sight, treatment as prevention is continuing to gain traction as funding and research priorities favor this movement. To learn more about this issue, stay tuned for the upcoming edition of the Northwestern Public Health Review.