As with other cities across the country, Chicago has strived in the past few years to become more bike-friendly, implementing the bike share program Divvy and designating bike lanes on streets throughout the city. Encouraging biking is not only a way to reduce the carbon footprint of the city, but also to promote health and reduce chronic disease. The bike policies that the city has adopted, however, neglect the needs of its diverse neighborhoods, and are particularly damaging to low income neighborhoods and communities of color. In fact, a 2015 survey by Divvy revealed that almost 80 percent of its users are white despite whites making up just 32 percent of Chicago’s population. Continually, low income and black and brown communities are left out of the decision-making process of policies that target them, an issue exacerbating social injustice and public health inequality. One organization bringing light to the issue of biking inequity and fighting for community representation in transportation policy is Slow Roll Chicago. We spoke with Oboi Reed, co-founder of Slow Roll Chicago, about how his work is positively benefiting the public health of Chicago’s underserved communities, and how by riding bikes, Slow Roll has become a vehicle for social change.

On any given Saturday morning or Monday evening, you may find a group upwards of a hundred people on bikes streaming through the streets of a Chicago neighborhood together. It’s not what you’d think– they’re not a group of lean men donning spandex and zipping at high speeds on their high tech road bikes out for their 100 mile + weekend ride. They are a group of all ages, sizes, religions, genders, and races. And they ride slowly for a few hours, telling stories, listening to music, and viewing the hidden beauty in their neighborhoods pass by. Each ride is free, open to anyone, and is hosted in partnership with community-based organizations in a low- and middle-income (LMI) and primarily black and brown neighborhood on the south and west sides of Chicago. In this way, these rides are truly designed for and with the community. There is no one way to ride a bike here– every type of bike, clothing, person, and style is celebrated here. 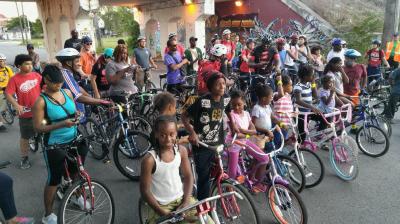 Recently, a community ride spanned through Little Village, a primarily Latino neighborhood, to Lawndale, a primarily black neighborhood, and both low-income neighborhoods prone to violence. The ride was an opportunity to connect people within and between the neighborhoods, to learn about community organizations, and to address explicit and implicit challenges these neighborhoods face. While riding through Little Village, the group played hip-hop music, and through North Lawndale they played Latin music, a thematic collaboration of the people who live there. These rides are showing people who might not normally identify themselves as someone who bikes– to work, to the store, for fun– that they have a place within the biking community, which is an essential first step in combatting a political and social system that promotes inequity, especially when it comes to biking culture.

Plans for a bike sharing system within Chicago began following a 2007 visit by then Mayor of Chicago, Richard M. Daley, to Paris, France. Daley was impressed by the city-wide bike sharing system and thought a similar system could work in Chicago. In 2013, Divvy launched. The majority of Divvy locations, however, went to affluent, white areas, with only 10 percent of stations serving primarily Hispanic areas and 17.7 percent to primarily African American areas, even while those populations each make up around one third of the city’s population. Building protected bike lanes throughout the city was another goal of the administration, and yet upwards of 30 percent of both Southside and Westside residents (areas of Chicago with the greatest proportion of LMI and black and brown neighborhoods) still don’t have access to a protected bike lane within a half mile of their homes.

The city’s bike efforts have upped the proportion of people who commute by bike, yet Chicago still trails most metropolitan areas in the proportion of bike commuters. Slow Roll Chicago advocates for more equitable distribution of biking resources, using data to bring the need for more bike lanes and bike sharing stations to the communities who need them most on the Southside and Westside to the attention of the Mayor’s Bicycle Advisory Council. Even then, not everyone in the city council is willing to listen, yet Slow Roll Chicago and its partners keep trying.

While bringing needed bicycle resources to the communities slighted by the current bike policies is of high priority of Slow Roll Chicago, numerous other efforts are on the group’s agenda, too. For one, they work to dismantle the vision of commuting by bike as the only biking system out there. When Daley brought Divvy to Chicago, he brought European bike culture to Chicago– the system that focuses on biking to work and other activities, the system he was impressed by in Paris. This system is seen throughout Europe– just look at the bicycle lanes and bike racks of Amsterdam and Copenhagen to see the “ideal” system.

However, biking is not “one size fits all.” And we can look to the country of Columbia as an example. Every Sunday and holiday from 7am til 2pm, main streets of cities are blocked off to cars so that pedestrians and bicyclists have free roam. It’s called Ciclovia[J3] . Some streets are even permanent bikeways known as ciclorutas. In Bogota, the capital, the rich live in the north, the middle class in the middle, and the poor in the south, but on Sundays during Ciclova, they cross paths in a shared humanity.

Could Chicago adopt this Colombian bike culture?  In Chicago on Memorial Day Weekend, we have Bike The Drive , where Lake Shore Drive is shut down for bikers to take over; yet, this is one day a year and costs over $60 to participate. It is essential that cities, and Chicago in particular, understand that commuting by bike to work should not be the only focus of bike policies, and that other models, such as ones with blocked streets and organized community rides, are also worthwhile.  This understanding will only come by having all communities’ diverse needs represented in the transportation planning process.

Transportation By The People

When it comes to public health, and this too holds true for public transportation, meaningful change can only be made by involving and honoring the public it is meant to serve. Advocating for equity is different than for equality—equality treats everyone the same, giving everyone the same resources, while equity is giving everyone what they need to be successful. While the young professional might benefit from commuter-friendly bike policies, lower income neighborhoods might benefit from programs that get people to ride a bike for fun and/or to lose weight and prevent diabetes. The public’s needs are as diverse as the public itself, and what works in one neighborhood will not necessarily best serve the next neighborhood. Therefore, we need representation of all needs, and that means the people living and working in the communities affected by transportation policy should also be leading the decision-making.

Recently, the city of Chicago failed to do just that when implementing its Vision Zero plan. Vision Zero (VZ) was unveiled this summer as a plan to eliminate traffic fatalities and injuries, an awesome goal yet flawed in its implementation. A major outcome of VZ is increased traffic enforcement– the policing of drivers, bikers, and pedestrians on and off the road. The areas targeted most by these increases are poor communities and communities of color on the Southside and Westside of Chicago, areas that are already hyper-policed.

From 2008 to 2016, of the top ten areas with the largest number of bike tickets, seven were majority African American and three were majority Latino, despite the greater prevalence of biking in majority white areas. Police stops, which can happen for simply riding on the sidewalk in front of one’s home, can result in a fee of $50-$200, but can also give police reason to check an individual’s information to see if there is any warrant that could lead to arrest. It’s not just that communities who have the least financial resources are being asked to pay for transgressions not even policed in more affluent communities, but that it gives police the power to racial profile, amplifying distrust of law enforcement in these neighborhoods. These areas also lack the robustness of protected bike lanes that their affluent neighbors on the Northside enjoy, and riding alongside traffic is often too dangerous, forcing bikers to stick to the sidewalk for safety. Tampa implemented a similar traffic enforcement plan, with police stopping to ticket and check the information of cyclists, hoping to reduce problems in areas with high crime. However, under this plan Tampa saw no reduction in its crime rate while a disproportionate number of black cyclists were targeted, leading this plan to be perceived as harassment. A policy meant to save lives is causing fear and injustice to spread.

Moreover, a Vision Zero summit was planned by the Active Transportation Alliance (Active Trans),  without any inclusion or engagement of people of color, low- and moderate-income residents, or community organizations in the very neighborhoods that Vision Zero is targeting. Slow Roll Chicago, along with other community advocates, quickly called for the summit to be called off until these communities were included as leaders in the planning process. Their calls were successful and the summit has been canceled. While no elite and out of touch meeting will be occurring, there is still a gaping bias in Active Trans’s representation and dismissiveness of LMI communities of color, a systemic blindness that needs changing.

When it comes down to it, Slow Roll Chicago’s purpose is simple, “We ride bikes to make our neighborhoods better.” Social justice has been their key mission from the beginning, and public health has benefitted because of it. The neighborhoods Slow Roll Chicago works with and represents have been historically plagued by unemployment, poverty, and violence, and by the lack of affordable housing, healthy food, good schools, and opportunities. Painting bicycle lanes and installing Divvy bikes won’t get people to commute to work in these neighborhoods; first, the fear and distrust clouding the streets must be lifted. “Violence thrives in places of silence, emptiness, and lack of regard,” says Oboi Reed, co-founder of Slow Roll Chicago, “but there’s no more silence here because we are loud.” By bringing neighbors together on community rides, people become willing to engage with each other and with their neighborhood space. They are taking back their streets and discovering that biking is simple and safe.

In order to implement biking as a form of transportation in communities, first we have to give people a sense of place in the biking community. We must get people engaged in their community space where they can freely move and form connections with their neighbors. In this way, the city of Chicago can use biking as a vehicle for a reduction in chronic disease, in violence, and in structural racism. And throughout it all, the city of Chicago must have people of all communities and of all diverse needs leading the transportation policy changes.

There are many ways you can get rolling in this movement as well. By checking out Slow Roll Chicago through their website, social media, and email newsletter , you’ll learn of community rides you can participate in, like the one next Saturday, September 30th at 10:30am. You can volunteer with Slow Roll Chicago or make a donation. And you can continue learning about how bike culture in Chicago should be as diverse as its people, with policies made by the communities they affect. Bike equity is a matter of public health and by advocating for and practicing it, we can “make our neighborhoods better.”