By: Shannon Wagner In the United States, the growing inequality between the rich and the poor creates insurmountable barriers to those lacking economic and social resources. [...] 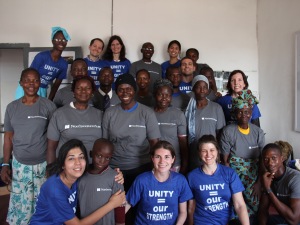 By Anna Maitland, J.D., Schuette Clinical Fellow in Health and Human Rights Access to Health students and faculty sit with the Federation Health Board to discuss findings [...]

Global The WHO has named Cuba as the first country in the world to eliminate mother-to-child transmission of HIV and syphilis. The Democratic Republic of Congo is reporting a [...]

Global Africans are increasingly turning to indigenous, rather than exotic, vegetables, which often contain more nutrients and are more environmentally friendly. Several [...]

Global 64 people have been affected with the MERS virus in South Korea, and 5 people have died, as the government strengthens public health precautions. As the UK proposes to [...]

Global As corn farming becomes more popular in some African regions, the rat population is exploding, leading to increasing numbers of cases of the plague. After the shutdown [...]

Global Will we ever completely eradicate Ebola, or will we just subdue it? Vox analyzes the obstacles we’re still facing, while a new paper describes a model that [...]

Global The latest Ebola updates: As you have probably heard by now, a doctor in New York is now battling a case of Ebola. They have been treating him by giving him a blood [...]

Copyright © 2022 Create a free website or blog at WordPress.com.